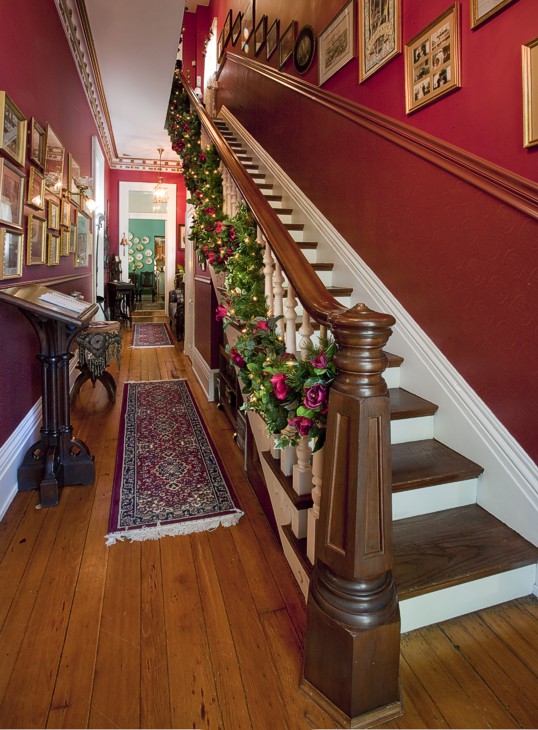 While restoring the house, the Clifts' philosophy was to retain as much of the original as possible, adapting their present needs to the existing structure. There were no changes made to the building, with the exception of updating the bathrooms, kitchen and laundry facilities. As walls and dropped ceilings were removed many original details were found, such as plaster moldings and ceiling medallions. Wallpaper over 100 years old was discovered in places that were covered up many years ago. The restoration involved removing 70 years of insensitive remodeling and reviving the original character of the house. This included reopening the transoms, milling trim to exactly match the original, installing reproduction gas/electric lighting, restoring two large parlor doors which were found in the garage, sanding and finishing 3200 square feet of pine flooring, opening up and cleaning six fireplaces and replacing five missing mantels with antique mantels of the period. All 27 windows were reglazed, repaired, restrung, and repainted, but the biggest challenge was the restoration of the stairway and halls. The staircase was restored by a local craftsman based on an old baluster and part of the old railing which were found in the attic. The Gateway Bed & Breakfast is an example to the community of sensitive rehabilitation and adaptive re-use as well as a successful business. Ken has served on the Newport Historic Preservation Commission and the Historic Property Advisory Commission for the State of Kentucky. Newport, one of the largest historic district in the state of Kentucky, is a wonderful and convenient place to live.

"My husband and I visited Newport the weekend of Sept 20-22 for our anniversary. We had planned to attend the Octoberfest in Cincinnati. We wanted to stay in a bed and breakfast that was within walking distance. We booked at the Gateway B&B. We loved it! We checked in on late Friday night, walked to the city of Newport to eat and the next day walked across the pedestrian bridge to Cincinnati. The B&B is so convenient to everything. It is also a very beautiful, comfortable old home that has been lovingly cared for. Our room was outfitted with a queen size bed and full bath with jetted tub. It was private and quiet. The breakfast was tasty and filling and the host made you feel like you were family. A huge plus was the off street parking. We would definitely recommend and stay again. "